Donald Trump’s win in the US Presidential elections came as a surprise to many. Political parties, as well as the big corporate houses across the world were almost certain that this year would mark the historic victory of a woman candidate for the White House. However, Trump proved them wrong. The only mantra that Trump used to entice the voters was the phrase ‘Make America great again’, but is this mantra enough to win the presidential election against such a strong candidate like Hillary? Of course, not! So much more has gone into Trump’s winning formula. Social media played a key role in his victory. This election, therefore, also marks a change in the way election campaigns have been conducted and perceived in the past. 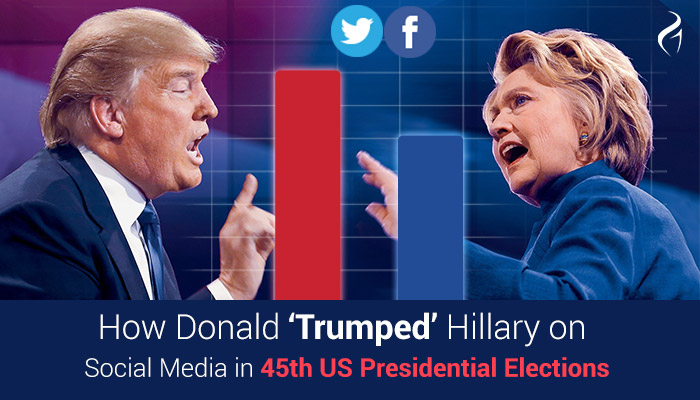 Flex muscles on social media – show us the followers

There is not even an iota of doubt that social media has become one of the biggest marketing platforms. With around 84% people using the internet in the US, publicists realized that social media was the biggest platform for election campaigns too. The internet’s ability to reach out and influence billions of people in one shot – with one video, one tweet, one story – is exceptional, and the power of online word of mouth is increasing by the day.

To be very clear, I am not suggesting that Trump simply won because he has more followers on Twitter, or he is good at leveraging the power of social media. Of course, that would be nothing more than sheer assumption! However, to say that social media is not just helpful, but essential for any kind of publicity in 2016 is not an exaggeration.

In an interview with Lesley Stahl, a popular American television journalist with CBS News, Trump spoke about the role that social media has played in his victory. In his first post-election television interview, the President-Elect said that he will continue to use social media during his tenure in the White House.

With over 15 million followers on Twitter and around as many on Facebook, Donald Trump has all the reasons to use social media. During the course of writing this article, I casually checked Hillary’s official Facebook page as well, and as a matter of fact, at the end of the elections, she has about 9 million followers and 11 million on Twitter. So, as you can see, Trump had won the battle online much ahead of the election results. Interestingly, Trump had last tweeted 5 hours back and Hillary on November 9th. 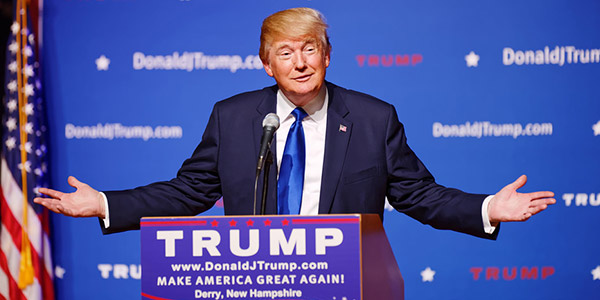 To add to the trivia, do you know that Trump made his formal Presidential announcement on Periscope – the popular live streaming app?

So, of course, numbers on social media matter a lot, as they signify the influential power of a candidate over an online audience – which in the case of the US is approximately 84% of the entire population. Let’s look at the graphs below: 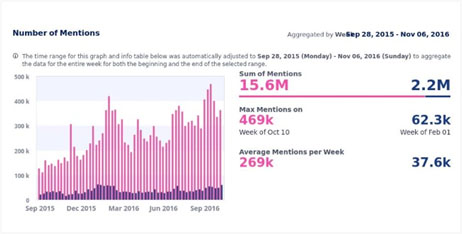 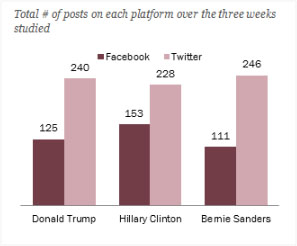 But, of course, the numbers are just the tip of the iceberg.

Have you ever thought: what does a social media platform offer to a presidential candidate that a traditional media outlet doesn’t? The answer is coolness and relatability! The biggest power of social media is to make the audience feel like you are one of them – a commoner. The idea of someone like you competing for something greater resonates better with the audience in today’s world compared to a starry aura that worked a few decades back. Look at the two posts below.

These posts signify the brand image the candidates wanted to portray for themselves.

So, yes, social media beyond the numbers and volumes is about “perception and brand-building”. Trump put a more convincing and relatable image on social media than Hillary. Maybe #MakeAmericaGreatAgain” resonated more with Americans than #ImWithHer. Who knows!

The trends of social media are, of course, not just limited to what candidates have to say or what the audience has to listen – they are a complex mix of perception and technology. 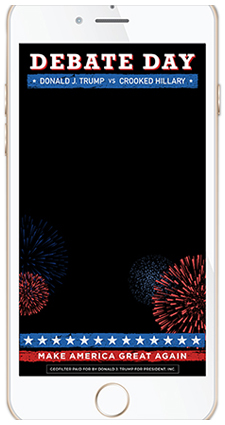 Can you image there were Snapchat filters made for both the candidates and, at one point in time, a photo frame stating, “Donald J. Trump vs. Crooked Hillary” was trending on Snapchat?

The social media team, the messaging and the perception

Social media offers an excellent alternative in the time when traditional media is not working in your favor. Trump’s team had gazed the hostility of the traditional media towards their client at the very beginning of the campaign. The Big League Truth Team, therefore, in its messaging constantly seeded the idea to combat the rigged mainstream media on the social media platforms. They went all out on social media platforms extensively. On the final day of the Republican convention, Trump’s team even bought the promoted hashtags of the day for more than $200,000.

During the presidential debates, the Big League Truth Team continued with the one-point messaging and tone they had already decided for Trump. They completely ignored the counter argument provided by Hillary and did not bother responding to them. The team only focussed on what they had to say directly to their audience. Perhaps this ‘single agenda’ messaging worked for them.  Look at one of the most popular tweets by Trump this election season: 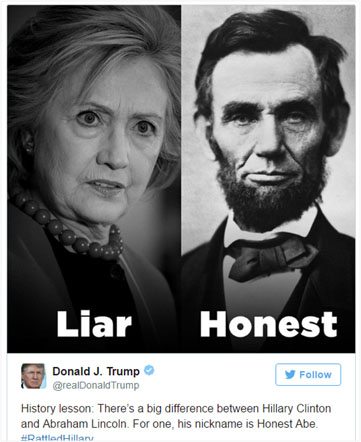 Then of course, the Big League Truth Team knew it’s easier to unleash the publicists online – on different platforms and in different modes – because it is obviously far easier to share political thoughts on social media than probably knocking every door in the neighborhood.

Though Clinton’s publicity team outspent Trump’s campaign on TV commercials, celebrity engagement and worked extensively on door-to-door campaigns, Trump simply managed to stay in the NEWS by making controversial remarks continuously.  Of course, this was a well thought of plan by his team to cash in the essence of the old proverb, “any publicity is good publicity’. Until the final debate, Trump had trended more negatively than Hillary; however, with the subtle change in messaging by Trump’s team as election approached, the negative sentiment online for both the candidates came pretty close. 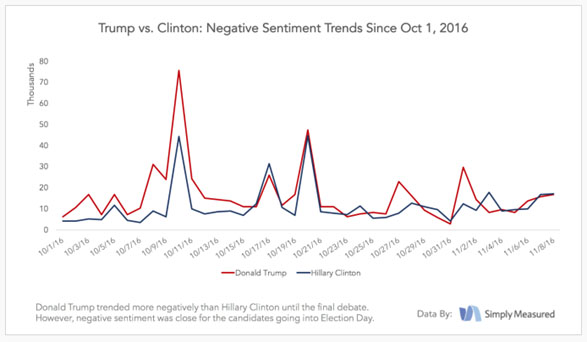 Trump’s team tried their hand at some unique ideas as well – they launched an app called “Trump yourself,” which superimposed Trump-style insults on their supporters’ Facebook profile pictures. They left no stone unturned to ensure that Trump was seen everywhere – no matter how!

The trends that changed, the myths that broke

Gone are the days when a charismatic young leader could simply mobilize the youth by existing on social media and giving motivational speeches. The 2016 US elections have shown how and to what extent politicians need to engage with the voters to create the desired buzz. Right from crafting the core political messaging in hashtags, to understanding the social media algorithms, to be seen on the right platforms – politicians today need to do it all!

The upcoming elections in other parts of the world will testify to these observations very soon!

I help businesses to identify realistic online goals and then help them achieve these goals through SEO, Social Media, Content Marketing, Video Marketing and Email Marketing. I’m currently working as the Director of Digital Strategy at Pyrite Technologies Pvt. Ltd, which is an full-fledged Inbound Marketing Company in India.

2021 © All Rights Reserved. Privacy Policy | Terms of Service
This website is built on the same great platform all of our clients enjoy.
Pyrite Technologies is a Digital Marketing firm specializing in Search Engine Optimization, Social Media, Marketing, Content Development, Inbound Marketing, Lead Generation, E-Mail Marketing and Online, Branding. Google and AdWords are trademarks of Google, Inc. and are registered in the United States.All other trademarks are the property of their respective owners and are used with permission.